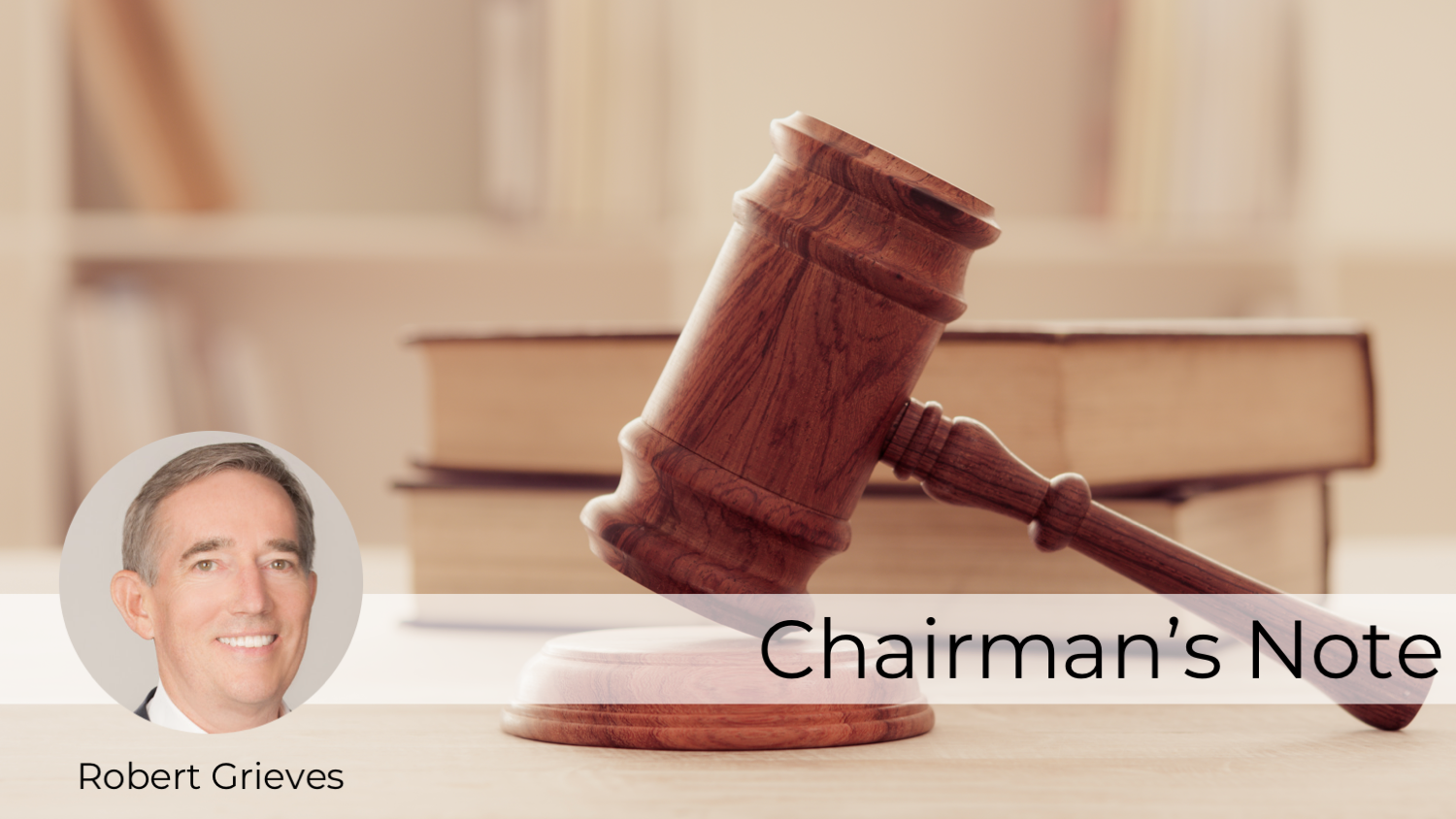 Last year, 2019, began with a number of events celebrating AmCham’s 50th anniversary in Hong Kong, and the Chamber’s successes over the past five decades.

Since then we have lived through a “new normal” cycle of violent protests followed by government inaction, all of it played out against the continuing trade war between the US and China.

At AmCham we are responding by increasing our bespoke networking events and liaison with outside counselors, including the US Consulate in Hong Kong, to provide our members with advisory services and high-level counsel as they address a spectrum of business challenges.

Earlier this month Tara, Jack Lange, Geoff Siebengartner and I engaged in a week-long round of meetings in Washington on Capitol Hill, with Administration officials, and with think tanks.

Our visit was the first in what we hope will be a series of smaller, more topical and industry specific visits to Washington, as distinct from our practice of the recent past, where we visited once a year with a large number of members with divergent interests and objectives. In this way we hope to encourage more focused discussions that lead to impactful, positive outcomes.

On our visit we found the anti-China sentiment in Washington now runs deep on both sides of the aisle, that tensions could continue to escalate through the election in November, and that pessimism is rampant about whether a comprehensive trade deal with China will ever be agreed.

During our meetings in Washington we responded by pointing out the ways in which Hong Kong embodies American values and aspirations, and advocated once again that Washington pass no measures that could potentially harm the people of Hong Kong.

We do have allies on the Hill, in the Administration and at various think tanks, and we believe that more frequent engagement with these groups will help our members as they conduct business in Greater China.

Speaking of Greater China, this year we will expand our footprint into the Greater Bay Area by forming an alliance of leading American companies that are already present in Hong Kong and the GBA.

We will utilize the US Business @ GBA Bloc as a platform on which to showcase best practices and success stories, as well as help address the challenges in the GBA. In partnership with these companies, more events will take place in the Greater Bay Area to demonstrate AmCham’s commitment to commercial relevance there.

Specifically, we hope to hold some events in Shenzhen, just across the border with Hong Kong, to highlight our commitment to the GBA and the firms in it, both Chinese and international.

Meanwhile, from April 22 to 24, one of the US Commerce Department’s largest events of the year will take place in Hong Kong – the Trade Winds Conference. The conference represents a strong vote of confidence in Hong Kong. We already have a record sign-up of more than 70 US companies at this point, with a target of 110, according to Commerce.

These companies come from a diverse range of industries. In a few minutes Bradley Harker, head of the US Foreign Commercial Service in Hong Kong, will share more about this important initiative.

Restoring Hong Kong will be another key theme for AmCham this year. For our Leadership Forum members we will offer briefings from Hong Kong government officials and business leaders on business policies and opportunities across the GBA; programs on how to find and develop talent as opportunities increase with the receding trade war; and on what the future holds for various industries represented by our membership.

As I mentioned earlier, we will customize Congressional and trade delegation visits from the US to fit our members’ interests and concerns, and combine this effort with more frequent, and industry specific, AmCham delegations to the US.

Under the rubric of restoring Hong Kong, our Future Leaders program continues to garner rave reviews from participants as well as sponsors. The rising young executives in the first ten-month program will graduate this coming June. As a result of this program, we believe participants will be more engaged with Hong Kong’s community, better equipped to face the future with expanded professional networks, and have more creative, entrepreneurial mindsets.

The future of logistics in the city is intimately tied to Hong Kong’s future, particularly as they relate to the port of Hong Kong and the city’s international airport.

This year the Chamber will continue to explore the issue of logistics and how new technologies can improve productivity and performance.

Peter Levesque, former AmCham chairman and CEO of Modern Terminals, has long argued for greater automation of operations at the port of Hong Kong. Last April four of the port’s container terminal operators, including Modern Terminals, formed a collaboration that will break existing silos between the port’s terminals through an automation strategy.

Karen Reddington, an AmCham Board governor and President of FedEx Express in Asia Pacific, will in a few minutes tell us about refocusing for the future. FedEx runs the largest fleet of aircraft in Asia, and technology remains the key to increasing productivity in airline freight logistics.

Today we are holding our AmCham priorities event at the American Club, which, along with the US Consulate in Hong Kong, Hong Kong International School and the American Women’s Association, are major pillars of the American community here.

Strengthening that community will be a priority for AmCham in 2020, along with the continued development of our very successful Women of Influence Committee and its annual conference. Stay tuned for further announcements in this regard.

The values of our American community – private enterprise, free trade, the rule of law, ethical and responsible business practices, transparency and the free flow of information – are the values of Hong Kong, which enhance the city’s stature as an international business center.

Diversity is increasingly an important value in corporate cultures. As do many of our member companies, AmCham commits to, and stresses the importance of, racial and cultural equality, diversity and harmony within the office.

For over a decade, AmCham has welcomed job and intern applicants from all races and employed staff members from international backgrounds to create cultural diversity in the office.

The Chamber is pleased to be a signatory to the Equal Opportunities Commission’s Racial Diversity & Inclusion Charter for Employers, and is formally adopting a policy of racial equality to increase awareness and cultivation of racial equality and inclusion at the workplace.

Enhancing the Role of International Business in Hong Kong’s Prosperity

As we enter a new year, we should keep in mind the part played by American and international business in Hong Kong’s continued prosperity.

Despite a slight decrease from 21% to 18% from 2015 to 2019, the US has established the largest number of regional headquarters and regional offices in Hong Kong over the last five years, consistently followed by Japan and China during the same period.

Given the extraordinary events of 2019, there is certainly room for improvement regarding political stability and security. US companies take this very seriously, because business hates uncertainty and instability. Hong Kong needs to resume normal life and should resort to peaceful means to pursue our collective goals.

However, there is little disagreement that Hong Kong continues to offer all of these factors to businesses to help them succeed here.

Looking to the Future

In 2020, AmCham will make its support for start-ups and SMEs, particularly those in the tech sector, a priority. This will align with our commerce-relevant strategy in the GBA beginning with the US Business @ GBA Bloc.

With tremendous support from our Leadership Forum companies, AmCham will serve the SME sector better and grow our membership base by providing more business matching opportunities for both large and small companies.

While 2047 remains a distant milestone, we have been told by some experts, such as eminent Hong Kong jurist Henry Litton, that the common law system does not switch off overnight because it crosses from 2046 to 2047. However, business likes to see certainty in making strategic decisions.

We therefore encourage the Hong Kong government and Beijing to initiate discussions soon on Hong Kong’s future to give certainty, hope and positivity for the community to forge ahead. All of us here today wish to see ‘One Country Two Systems’ become a success.

As I mentioned earlier, AmCham just celebrated its 50th birthday in 2019 and US businesses are not backing away from the SAR, as the data show. We will continue to work with all stakeholders and support our members to reap the rewards of the exciting opportunities afforded in this region.